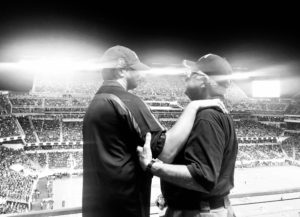 Can you hear it?  Can you smell the popcorn and hot dogs? Can you see the lights and feel the excitement in the air?  These are all things that U.S. Army First Lt. Garrett Spears and his family thought he may never experience again.

Garrett graduated from Texas A & M University in 2011, but he had plans to serve our country long before. He signed his Army contract within the first week of college and got to work just after graduating with a degree in chemistry.  While participating in combat field training at Fort Hood, TX in October 2013, Garrett was struck in the head by a lightning bolt.  Fortunately for this fallen soldier, he was kept alive on the training field via CPR. Although he was alive, his life would never be the same. As result of the accident, Garrett sustained a traumatic brain injury due to the strike and subsequent lack of needed oxygen, severe burns, loss of use of his legs, vision loss, and a long list of other challenges most of which he will battle forever.

Garrett and his family began working with an NCC Case Manager in 2015.  At this point Garrett could barely speak or stand.  Now with the unrelenting support of his family and the Community Support Specialist (CSS) that was matched with him on day one, Garrett is now scaling flights of stairs and is even able to participate in his own care team calls.  His determination to regain independence is unabated and beyond comprehension.

This photo was taken at a recent Texas A & M football game.  He is pictured here with his grandfather who has remained a steadfast supporter.  The photo was taken by his Community Support Specialist Jason Gant, and you can almost feel the pride captured through his lens.

While some say that Garrett is Texas A&M’s biggest fan, we’d like to offer that we are one of Garrett’s biggest fans.  Neuro Community Care is proud to support warriors like Garrett in working to achieve their most inconceivable dreams.  Live for moments like this.  The moments that truly defy the odds.