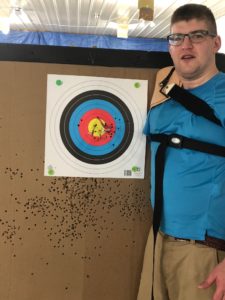 John Quincy Adams once said, “Patience and perseverance have a magical effect before which difficulties disappear and obstacles vanish”.  There is no greater example of that than Air Force Veteran Matt. H.

Matt has been pursuing Adaptive Archery with his Community Support Specialist (CSS) for approximately eight months.  Although wounded during his service to the country, and losing his right arm, he chose to pursue a sport that demands great patience and strength, and for most people, requires two arms.  But Matt saw this as a challenge to overcome.  He was determined to achieve his goals, and with his CSS, also named Matt, he was able to do just that.

Matt, his CSS and the archery range owner, over a period of many months and a few failures, were able to create a mechanism for Matt to independently complete all the steps to shoot an arrow.

This was completely new territory for all involved, but Matt stuck with it when many others would have given up. Through practice, repetition, patience and perseverance, Matt is now shooting at greater distances and will continue to shoot and aims to enter competitive archery events.

NCC is proud to work with veterans like Matt.  His perseverance is an attribute shared by so many brain injury survivors. We are also grateful for our encouraging CSS, Matt, and his remarkable commitment to the NCC mission.